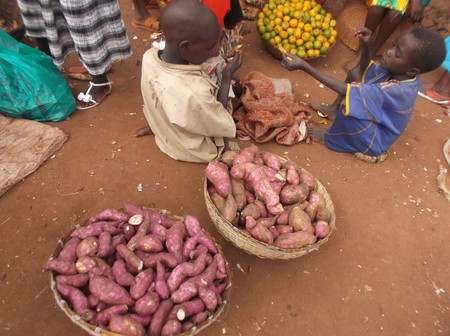 When our many generous donors allowed Green Life to build the Green Village, the team immediately got to work on a large house for the children to sleep and eat, and on small-scale agriculture for their sustenance as well as education. Now they want to raise these endeavor to a new level, extending the agricultural activities and supplying the Green Village with electricity and its own drinkable water.

The situation. For twelve long years, civil war was wreaking havoc in Burundi. Millions of people were displaced and countless families torn apart. The results can be felt to this day: The East-African country is one of the poorest in the world, almost half the population is starving, the political situation is volatile. Children suffer the most from those conditions. Thousands of boys and girls whose parents are either dead or missing live on the streets of Burundi’s cities.

The project. The Green Life association, based in Gitega, a city in the heart of Burundi, wants to remedy the situation. Green Life was founded in 1997 by then-students, to look after street children, to help them out of their social isolation, to send them to schools, and thus to endow them with a chance to a future without hunger and crime.

Having built the Green Village for these children, with a main building that can accommodate more than thirty people, and having launched their first agricultural programs, Green Life now wants to take the next logical steps to expand their operations, a process that will consist of four phases.

The goals. In the first phase they will buy another plot of land to grow tomatoes, potatoes, cabbage, onions, and various other vegetables. These will benefit the children directly as food, but the local market situation for these products is also very promising. The revenues will ensure that the village will thrive in the long-term.

The second phase will contribute to this permanent budget with an expansion of their livestock. They already keep a number of animals in the Green Village, including goats, sheep, chickens, and ducks. When the second phase is completed, they will construct a stable and buy a cow to join into the local dairy business. Again the prospective supply is such that they will be able to sell a surplus to earn additional money for running expenses such as medical bills, clothes, and school fees for the children.

The third phase will greatly augment the efficiency of the previous two phases by building a water tank and thereby establishing an independent water supply for the field and the animals. They will still have to buy the drinking water for the human residents, but the saved rain water will be a great boon for their water-intensive farming activities.

Finally, they will establish solar-powered electricity for the village, which will allow them expand on some of their educational activities, such as welding, music, and pottery; support their agricultural program; and make them less dependent just on natural lighting.

How does the Green Village fulfill the Your Siblings criteria?

Sustainability: Recurring costs can be covered by the sale of eggs, dairy products, fruit and vegetables, and their pottery. These products also, and primarily, benefit the children themselves, saving the project many further costs, and thereby ensuring the self-sufficient project philosophy.

Transparency: The project can be visited at any time. You can view the accounting data at Green Life in Gitega, and we also publish various types of documentation, including copies of all relevant receipts, on these pages.

Nonprofit and nongovernmental: Green Life has no commercial ambitions and is independent of the Burundian government.

Local roots: Green Life was founded and is lead by Burundians. They were born in Burundi and still live there.

Urgency: Due to war, disease, and hunger, there are overwhelming numbers of orphans and street children in Burundi. The street children in Gitega are suffering from malnutrition and crime. There is no welfare system for them to fall back on, and without help, they have no prospects of escaping their fate.

The dream of the Green Village in Burundi has become reality. Help Green Life expand and realize many more street children’s dreams of a brighter future!