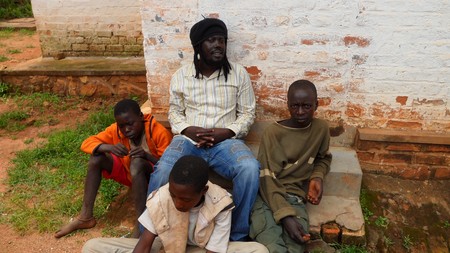 Go Green: The Green Village wants to provide a home to street children in Burundi and wants to show them how they can earn their subsistence without resorting to crime. To achieve this, they will run a pottery, a goat and poultry farm, a welding shop, and an art studio.

The situation: For twelve long years, civil war was wreaking havoc in Burundi. Millions of people were displaced and countless families torn apart. The results can be felt to this day: The East-African country is one of the poorest in the world, almost half the population is starving, the political situation is volatile. Children suffer the most from those conditions. Thousands of boys and girls whose parents are either dead or missing live on the streets of Burundi’s cities.

The project: The Green Life association, based in Gitega, a city in the heart of Burundi, wants to remedy the situation. Green Life was founded in 1997 by then-students, to look after street children, to help them out of their social isolation, to send them to schools, and thus to endow them with a chance to a future without hunger and crime.

To this end, Green Life wants to build supervised accommodations on a plot of land in Gitega. In addition to accommodations, they want to set up a vegetable garden as well as a small cattle and poultry farm. The association cooperates with the local schools to provide the children with education. The core of the project, however, is the pottery. There, the children learn to work loam and clay to produce hearths, tiles, and even statues.

The work project finances itself by selling the produced goods and through concerts, but so far the money has not been enough to comprehensively ensure that the basic needs of the children in food, apparel, and work materials are met.

The goal: Hence, Green Life wants to buy a plot of land where volunteers will build a Green Village. Thus, several problems are solved at once:

The gardens and farms would provide for better sustenance for the children. Furthermore, vegetables could be sold to supplement the income.

The pottery could be enlarged to boost production and thus revenue. Moreover, they could create more jobs.

The extension of the housing would allow them to accommodate forty children.

There will be a welding shop, and studios for art and sculpture on the premises, greatly enhancing the children’s chances to vocational education.

How does the Green Village fulfill the Your Siblings criteria?

Sustainability: Recurring costs can be covered by the sale of pottery. Additionally, vegetable and crop farming, and animal husbandry ensure the self-sufficient project philosophy.

Transparency: The project can be visited at any time. You can view the accounting data at Green Life in Gitega as well as at the Your Siblings office in Berlin.

Nonprofit: Green Life has no commercial ambitions and is independent of the Burundian government.

Each member is born in Burundi and still lives there.

Urgency: Due to war, disease, and hunger, in Burundi, the number of orphans and street children has sharply increased. The street children in Gitega are not only suffering from malnutrition and crime, but also, centrally, from the lack of welfare and prospects.

Help Green Life to realize the dream of the Green Village in Burundi!