Child Need Africa Out of the Red

We have great news from our clinic project in Uganda. The financial difficulties that we reported on in February are past and they are now operating fully sustainably. Now the clinic needs to build upon this foundation to expand its operations.

You can skip the background section if you have been following the developments around Child Need Africa’s project.

In 2010, when the Ugandan nonprofit Child Need Africa developed the proposal for the medical clinic they wanted to build, they specifically looked for a region where the need for a medical facility was unusually great but the closest such facility far away and hard to reach due to the lacking infrastructure compounded with overwhelming poverty. Thanks to their year-long experience serving disadvantaged families with a wide array of topics of basic medical education and what medical assistance they could lend, they quickly found several such regions and finally selected one.

When the clinic was funded, built, and fully registered in 2013, they found that time had only aggravated the situation. Unfortunately that not only meant that their help was needed all the more direly but also that they would receive less money for new medicine through their cost share program. The result was that the clinic made a monthly deficit that had added up to 7,199,550 USh (more than €2,000) by January 2014. They were able to buy medicine on credit without interest and didn’t have to take out a loan, but it was a situation that needed to be addressed expeditiously.

And address it they did. Various cost cuts made it possible for the clinic to no longer incur further deficits and two generous donations wholly independent of Your Siblings even offset the aggregate deficit from 2013. The first part was a decision of the clinic staff to temporarily forgo part of their pay and the second was a large in-kind donation from another Ugandan physician that allowed them to keep medicine in stock through May. During the last three months (August included) they again had to buy new medicine but even so they managed to stay in the black. At it’s current level the clinic is operating sustainably. 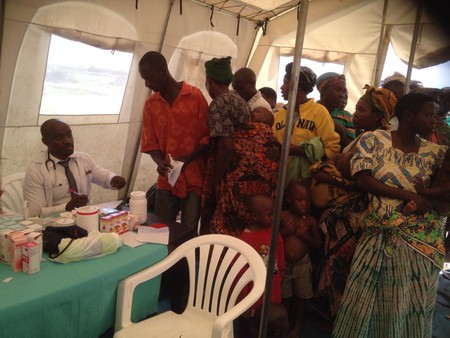 Their current level of service, however, still falls short of Child Need Africa’s hopes, aspirations, and potential, which is why they urgently need to launch their support project. The Sango Bay refugee camp at the border to Tanzania is a place where, at the moment, they can use their medical outreach to lend immensely effective help because the conditions at the camp are disastrous. Every day, at least two children die of malaria complications, acute watery diarrhea, and other communicable diseases. Over the last four months Child Need Africa has visited the camp about eight times and each time attended to about 250 patients. Due to their low stock of medicine, they were only able to help a fraction of them with more than a diagnosis, but they could regularly select the 30 to 50 patients with the worst symptoms for treatment. Doctor Mawanda John Bosco described one case to us:

I recall an instance where we reached the camp and I was called to see a woman who was pregnant and was bleeding profusely. She had had labor pains for about 28 hours. When I went to her tent in the camp, I was welcomed with a pool of blood. She looked pale and her blood pressure was very low with very fast heat beats. The only items in my hands were a pair of gloves, one cannula, and three [units] of normal saline. I made an IV line, transfused the fluid, and the lady came to life. Now contractions started, but the baby by exam was too big for her as a malnourished and short woman to push. The nearest health unit was about 30 km with no means of transport from the camp. It was a matter of life and death for this woman, so labor was conducted in a bush close to the camp and both mother and baby were saved. The child weighed 4 kg.

In addition to these outreach programs, they extended their HIV testing and counseling services to 40 people, and continued their community-based malaria prevention education with two sessions per month reaching approximately 360 people since February.

We have created a gallery of all of Child Need Africa’s photos from the refugee camp.

Please contribute to the support project for the clinic so that Child Need Africa can soon expand their medical education and treatment.

Written by Denis Drescher on Aug. 18, 2014 with maybe comments