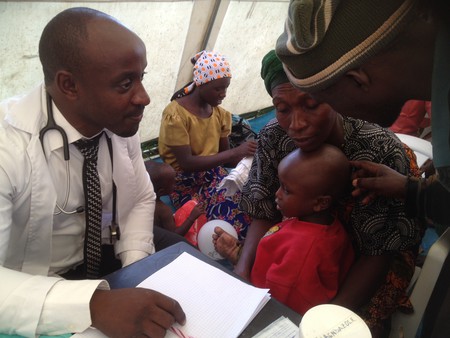 Poverty and illiteracy are rampant in the region, so that many families of, on average, seven children don’t have access to affordable medical care nor are educated about medical topics such as HIV, malaria, and family planning. Child Need Africa has been combating these problems with their mobile medical and educational program since 2007. Through our support, they have established a medical clinic at the heart of a particularly disadvantaged region. Ever since, the demand for their services has been overwhelming, to the extend that they will require additional sources of income to fund their medical and educational care in the long term.

The Social Context in Uganda

The Katerera area in Rubirizi District (formally Bushenyi District), with an estimated area of 78 square miles, has a population of over 40,000. Of these, 42% are children born to mainly illiterate parents. The average household here has seven children aged two months to fourteen years.

Majority of the population are peasants, and many live in abject poverty. According to the Uganda National Household Survey, two in seven households in Bushenyi live in poverty, meaning they subsist on less than $495 annually for families of nine on average.

HIV/AIDS is closely concomitant with the poverty in the region and takes its toll on the communities. Records from Bushenyi Hospital, where HIV sentinel services are done for pregnant women, show that 12% (approximately 4,800 people of those who sought VCT there) are HIV positive. Compared to other areas in Uganda, this is an unacceptably high rate of HIV, which leaves in its wake unprecedented numbers of orphans and vulnerable children.

Children in Katerera are highly vulnerable to diseases due to a number of factors such as poor nutrition, poor sanitation, tropical diseases, limited or lacking medical services, and harmful cultural practices. Those born with HIV suffer from opportunistic infections. The children’s frequent ill health forces them to attend school irregularly.

Further factors limiting their access are the long distances to the health centers, the long hours of waiting, patients often being turned away without having been treated or having obtained their medicine, and instances of discrimination by the health workers in public facilities.

Child Need Africa was founded in 2007 as a nonprofit, nongovernmental, unpolitical, child-centered, and  community-based organization to serve the rural communities in the Western Uganda with timely access to quality medical services for disadvantaged children and with household- and community-level educational programs.

One of Child Need Africa’s core programs has been the deployment of a mobile medical unit to various uncovered areas in order to bring medical facilities to the door step. This program serves the greatest number of infants who are in need of medical care by removing the mentioned barriers to health care as well as being a catalyst for community involvement in health issues.

Particular objectives are the counseling and guidance of children and women suffering from HIV and women with unwanted pregnancies, whereby the aim is to educate the beneficiaries about the various choices available for them and to help them overcome the challenges they are faced with; community-based education on issues of sanitation, personal hygiene, nutrition education, family planning, HIV prevention, prevention of mother-to-child transmission of HIV, human rights, and much more; and the delivery of basic health care services to children including immunization, deworming, and vitamin A supplementation.

The Performance of the Clinic

In 2010, Child Need Africa made plans and wrote a proposal for establishing a clinic as base for their medical and community services while also extending their mobile outreach program. Over two years, Your Siblings, with great support from Bronies for Good, completed the funding of the project as detailed on the pages of the project A Clinic in Uganda. In early 2013, Child Need Africa had completed the building and obtained all certifications, so that the clinic could launch.

The response of the local communities was overwhelming. The need for affordable medical services was greater even than the leading physician Dr. Mawanda John Bosco had estimated in 2010. According to his tallies, 150 families have regularly used their medical services by late 2013, and hundreds more have been tested for HIV and other diseases.

Most of these patients would not otherwise have been able to obtain any medical care, predominantly for financial reasons. As a side effect, the fraction of patients who were able to pay for their medicine was smaller than Child Need Africa had estimated. This development was compounded with economical issues. The project was based on prices and estimates that were current in 2010, but during the almost three years of fundraising and construction, almost all actual prices rose, sometimes beyond the scope of the contingency margins. Especially prices for transportation exploded during the early phases of construction and certification.

Various cost cuts made it possible for the clinic to no longer incur further deficits and two generous donations wholly independent of Your Siblings even offset the aggregate deficit from 2013. The first part was a decision of the clinic staff to temporarily forgo part of their pay and the second was a large in-kind donation from another Ugandan physician that allowed them to keep medicine in stock through May. During the last three months (August included) they again had to buy new medicine but even so they managed to stay in the black. At it’s current level the clinic is operating sustainably.

The Goal of the Support Project

Inevitably, such cuts result in a reduced level of service to the community, primarily because of the reduced stock of medicine that the clinic can keep. That is why Child Need Africa needs to establish an additional income-generating project to offset their expenses—much like the guest house we funded for the Another Hope orphanage.

After several months of research, Child Need Africa proposed to tap into the flourishing real estate market by buying a house near the capital Kampala, renovate it, and have the tenants pay for medicine and other supplies for the clinic with their rent.

They reviewed five houses that are for sale in lucrative regions in the suburbs of Kampala. They did background checks on the owners to ascertain their legitimacy and to find out why they decided to sell the houses. To that end, they also interviewed family members and neighbors. Next, they negotiated prices for each of the houses and assessed the extend to which they needed to be renovated.

Our project Permanent Income for the Clinic has enabled them to purchase their top pick from this list of houses. The house has six rooms and is located less than eight miles from the city center.

This project will fund the renovation of the house. Since they were able to buy the house for just about the exact price they had negotiated several months earlier, they are already able to use the contingency margin of the last project to erect fencing around the area. The needs of this project detail the costs of the rest of the renovation.

Should Child Need Africa manage to renovate the house for costs that stay within our contingency margins, then any money in excess can directly benefit the purchase of supplies for the clinic.

Key Distinctions of the Project